The Dodge arrived with two very small 6 inch air cleaners. I first changed with 10 inch and then with the help of Mancini Racing I was able to obtain two 14 inch dropped down (1.5 inches) base plate to allow clearance under the hood. That improved the Mopar's breathing greatly, meaning better acceleration.

Click to play video of loose spark plug insulator.
[Note: This will open a new window and play the video,
or will download the video to play on your computer,
depending on what web browser you use.]

The second problem was that the intake manifold was incorrectly installed; it was missing spacers and did not have gaskets at the heads -- just a thick glob of some type of sealant that had blown out in several places. Vacuum levels and braking efficiency were consequently negatively impacted.

Replacing the bad plugs and fixing the leaky intake manifold really woke up the 413. And with vacuum for braking, the Dodge stops well too!

I obtained these through connections with a member of a 1962 to 1965 Mopar Mail List Clubhouse from Ohio. (A big THANK YOU to him! And also to everyone who helped me search for, acquire and repair these very hard to find 1962 Dodge Polara 500 door scripts!)

Also, I replaced all the rubber bumpers, as well as the door, trunk and ignition lock cylinders so that one key works every thing. I got a carburetor synchronizer so both carbs pair perfectly. I installed new front and rear shocks; the Dodge tracks straight as an arrow.

Once I began to have everything in good order, I decided to try and contact the previous owners. The one whom I purchased the Mopar from was not much help and due to some of the items not being well maintained I determined that was not a good source. So I found an old car show plaque in the trunk, an Inland Mopar So. Cal. sticker and a 1962 license plate apparently used by the first restorer for car shows.

The car show plaque investigation came up blank. So I contacted the president of Inland Mopars. He questioned members of the club. They did not remember the Dodge, but remembered the owner who was known as Susan Koch in August 2001; but there was a name change and the trail went cold. That is, until I clicked on the 1962 Dodge Polara section of B-Bodies on the 1962 to 1965 Mopar Website and found a web page from August 2000 posted for this Dodge. 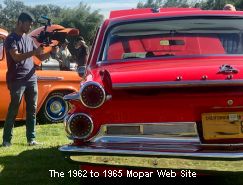 First show out the 1962 placed in the Circle of Champions at Redding Kool April Nites.


I asked the director of judging for the Chico Concours d’Elegance to share with me the score I received for future purposes toward improving the score. 94 out of 100! I am blown away. I would have never dreamed the score would be anywhere near 100 points. This is third place in Class O, Domestic Muscle (Stock) 1961 - 1976. [View the judging score sheet.]

Right now as far as being a dependable "jump in and go" vehicle, I would put this 1962 Dodge against the family's Range Rover Sport. Of course, the the Rangie is soother, quieter and has AC. It lacks the same "fun factor" though. (Adding AC to the Dodge is a future challenge.)

The bottom line is that this 1962 Dodge Polara 500 runs perfect! I have run the car back from shows at 105 degrees outside at 80 MPH for several hours and the Mopar does not miss a beat. Also, the Dodge does not loose a drop of any fluids.

In fact, the Mopar runs super strong -- as several friends who have 425 3-2 Vets and a Chevelle restomod with an LS9 will testify: they cannot stay with the Dodge.